People are getting smarter and continuously looking for any loophole in your system every day, anticipating fraud from happening by verifying their legitimacy.

As Easy As Taking A Selfie

An easy way for your debtors to verify themselves. Just take a selfie and our system will spontaneously define whether you are a live person or not.

With the help of deep learning, we can detect shots from a video, and track dozens of parameters (presence of glare and reflections, micro-motions, and pulse).

Our Liveness check is fully integrated with CONFINS’ verification process while ensuring the legitimacy of the photos.

Control the face relative position to the camera

The purpose of Liveness detection is to protect against anti-spoofing attacks and select the best shot for further biometrics identification.

The technology is new, we are greatly helped by AdIns on how to implement it in our business processes

The system, after being used for 6 months, the product is very reliable and the response from AdIns is very fast.

The knowledge of the AdIns team regarding this liveness product is very good, so we find it helpful to implement digitization in the credit approval process.

Implementation is fast and does not take much time.

The credit process has been improved and accelerated after using liveness detection. 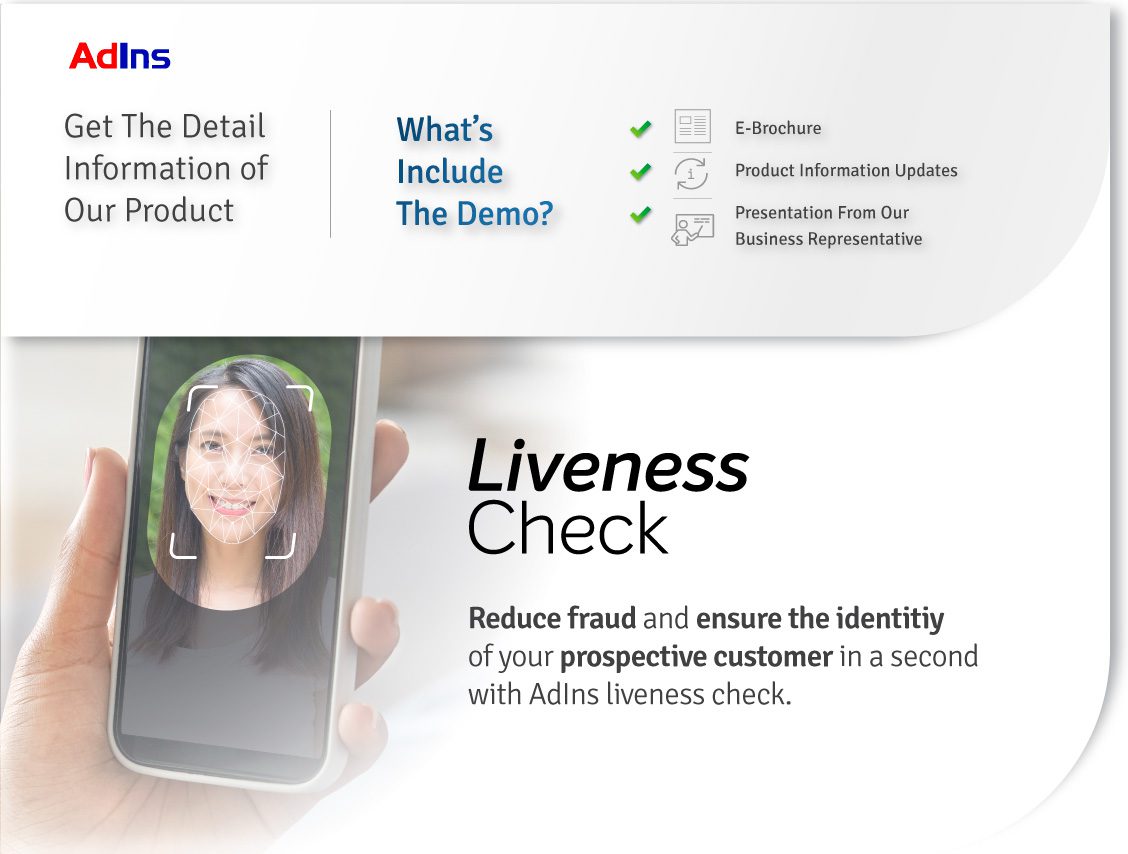 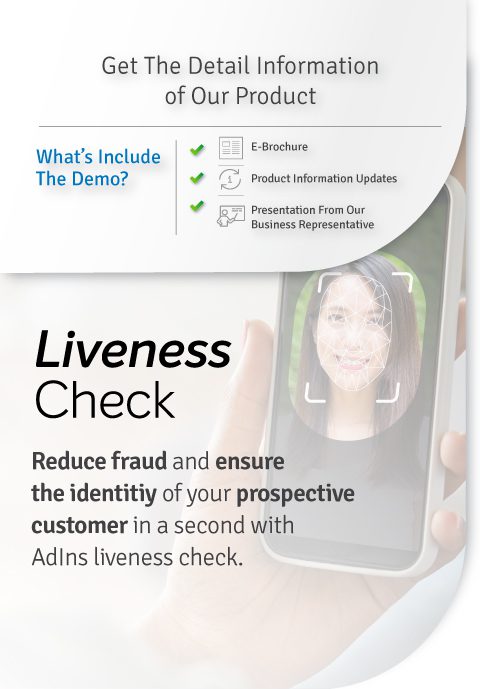 Please use a valid email address and phone number. Brochure and further follow up of your request will be sent directly to your email.

Working from home disrupts the approval process if you still doing everything manually, the hidden operational cost of photocopy, print, scan, and document delivery to your house often forgotten.

First, use an algorithm to analyze the received data. After that, it will be collected from biometric scanners & readers for the verification process of whether the source is from a fake/original representative. Liveness detection is used to reduce the vulnerability of the biometric system to fraud. By using Liveness detection we can adjust shooting conditions, and face position, and protect against "deepfake" attacks and fraudulent video streams. In some cases, external conditions do not allow the taking of a clear picture or photo of the face for biometric identification and verification of liveness. Since users can check in various situations: outdoors, in the dark, on the move, in bright light, our SDK automatically detects shooting conditions (dark, blurry, flickering) and illuminates faces without light or recommends choosing more favorable conditions for shooting.

Liveness detection technology allows the system to carry out the verification, identification, and authentication process used to verify the identity of the object in front of the camera in accordance with the identity registered in the system. The technology in this liveness detection can detect edges, depth, movement, skin, and facial recognition. The liveness detection system can be used for security systems and legal protection if there is data falsification/violation. Liveness detection algorithms based on deep machine learning, examine shots from a video and track dozens of parameters (presence of glare and reflections, micro-motion, pulse, etc.). This Presentation Attack Detection (PAD) can take advantage of active/passive detection methods. With this active and passive liveness feature, it can prevent hackers who log in illegally by detecting live or dead objects with 2 advanced features that we call active and passive liveness when digitally onboarding.

The system can ask the user to do things that spoofing cannot imitate. Then there is also the possibility to combine it with several modalities, such as keystroke-related analysis or speaker recognition that can detect mouth movements to determine activity.

This passive method uses an algorithm to detect images/photos indirectly without any user interaction. With high-quality biometric data that has been collected during registration, it can improve the performance of the activation and match detection algorithms.

In the Face recognition security system, liveness detection plays a role in distinguishing direct images and digital representations of the user's face using 2D/3D/ digital images. Frauds committed by users such as facial shapes can not be directly detected by the algorithm. With liveness detection, this can greatly reduce fraud and attack presentations that may occur.

Why should Companies use Liveness Check?

Liveness Check from AdIns speeds up the approval process by digitalizing. This application is integrated with CONFINS and Mobile Application. However, it is very flexible with other core systems.

Can Liveness Check be used on more than one device?

Yes, Liveness Check can be used on PC and Mobile.

How long does it takes to implement Liveness Check to your company?

You can implement Liveness Check for your company within 3 days.

What is the Difference between Facial Recognition & Liveness Check?

Liveness Check distinguishes live people from media presentations such as photos, videos, or masks which refer to fraud prevention for biometrics in general. while Face Recognition only scan faces in general, therefore you can use photos, videos or masks.

What should I do if I have problems operating Liveness Check?

Please submit a complaint through your IT support then to JIRA and we will immediately help with any technical difficulties.